The IECC: What will the future bring? 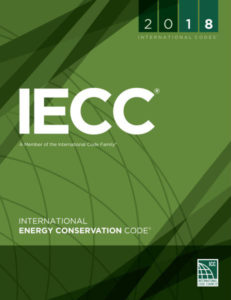 The International Energy Conservation Code (IECC) — referenced by the International Building Code and the International Residential Code — is a comprehensive energy conservation code that establishes minimum regulations for energy-efficient buildings using prescriptive and performance-related provisions. It is founded on broad-based principles that make possible the use of new materials and new energy-efficient designs. This code contains separate provisions for commercial buildings (includes high-rise residential buildings of four stories or more) and for low-rise residential buildings (three stories or less in height above grade).

The IECC addresses the design of energy-efficient building envelopes and installation of energy-efficient mechanical, lighting and power systems. Fully compatible with the family of International Codes (I-Codes), the IECC is one of 15 model codes that the International Code Council develops and updates every three years. It is in use in 49 states, the District of Columbia, the U.S. Virgin Islands, Puerto Rico and New York City.

Why an energy code?

Buildings consume about 40 percent of the energy our nation uses, so making buildings as efficient as possible is important. The Code Council’s commitment to energy conservation dates back to the 1970s when its legacy organizations first began developing model energy codes. The Model Energy Code (MEC) — the predecessor to the 1998 IECC — applied to all new residential and commercial buildings, and additions to such buildings.

Americans currently spend more than $200 billion each year on their energy bills. The National Association of Homebuilders (NAHB) reports that energy-saving features, according to 2019 survey results. This is consistent with findings from a 2013 NAHB survey that found that nine of 10 Americans were willing to pay two to three percent more for homes with permanent efficiency features. Another NAHB survey released this year also showed that consumers are attracted to the cost savings that green features provide, with nearly half of home buyers willing to invest in energy efficiency upfront for annual savings on their utility bills. According to the U.S. Department of Energy, to date the energy code has saved U.S. consumers over $44 billion and avoided 36 million tons of carbon dioxide emissions; and, between 2010 and 2040, the model building energy codes are expected to save homeowners and businesses up to $126 billion in energy costs.

Beyond energy savings, the IECC plays a critical role in promoting safer and more resilient buildings. The IECC’s building envelope provisions help control for condensation that could otherwise turn to rot, which destroys the building structure, and mold and mildew, which harm human health. Its air management requirements protect occupants from external hazards and ensure adequate ventilation of indoor emissions from certain building materials, finishes, paints and cleaning products. The IECC also helps maintain livable temperatures for longer during power outages associated with extreme weather, allowing occupants to “shelter in place.” For a white paper on the importance of energy codes in achieving resiliency by the Code Council’s Ryan Colker, click here.

Energy efficiency and the IECC

Under legislation first enacted in 1992, the U.S. Department of Energy has supported the development, adoption and implementation of the IECC. Further recognizing the importance of energy efficiency and sustainability, the American Recovery and Reinvestment Act of 2009 provided funds to states that adopted the 2009 IECC or an equivalent for residential construction, contingent upon at least 90 percent compliance by 2017. Code Council governmental member voting representatives overwhelmingly approved landmark updates in the 2009 and 2012 IECC that required a 32-percent increase in energy efficiency compared to a home constructed to the 2006 IECC.

Although some regions of the country have experienced market transformation and build beyond minimum energy codes, others are still evolving as the industry — including code officials, builders, architects and manufactures — adjusts to contemporary codes. This resulted in efficiency gains smaller than seen in previous cycles, as the 2015 and 2018 IECC resulted in 1- and 2-percent efficiency gains, respectively.

The 2018 IECC (which contains both residential and commercial requirements) is the result of a consensus-based code development process that involves the nation’s architects, product manufacturers, building code officials, builders and other energy efficiency experts in the home building industry. As a national minimum standard for energy-efficient residential buildings, the provisions of the IECC reflect the efficient products and practices employed by builders and design professionals.

There is a great deal of discussion about net-zero energy and net-zero carbon. Among other groups committing to energy efficiency and carbon reduction thresholds, the United States Conference of Mayors passed resolutions supporting putting the IECC on a glide path of steady progress toward net-zero building construction by 2050. The distance of the 2018 IECC from net zero is nuanced on several factors, including the definition of net zero, building type and occupancy, climate zone, and acceptable level of cost-effectiveness, and there is not one definitive answer on how much more efficient buildings should be before it is cost effective to make them net zero or zero energy building.

However, analysis by Architecture 2030, and the Florida Solar Energy Center shows buildings generally need to be 50 to 80 percent more efficient than the 2006 IECC, depending on occupancy and climate zone, to potentially be considered net zero, requiring a further reduction of approximately 20 to 50 percent. An average 2- to 4.5-percent decrease in energy use over each of the 11 code cycles from the 2018 IECC to the 2051 IECC would accomplish the mayor’s resolution of net zero by 2050.

A wide range of organizations and individuals from many different backgrounds have participated in the development of the IECC. Shaunna Mozingo, President of the Mozingo Code Group and recipient of the U.S. Department of Energy’s 2017 Jeffrey A. Johnson Award for Excellence in the Advancement of Energy Codes, shared:

The ICC code development process is one of a kind. It is the only code or standard writing process where anyone can be involved in writing the codes and only those governmental members without a financial interest have the final vote on what goes into it. The process is unique to ICC, and we are very lucky to have the opportunity to use this process when writing the IECC.

There are many interested parties, from home builders to manufacturers; code officials to designers; energy raters to energy advocates. And, it wouldn’t work without all of them. The best thing about the IECC is all of its flexibility and options for compliance, and that’s what makes the process of writing it so great as well. We have a lot of people who are passionate about what they do and what they believe. In the end, we have a book of compromise, flexibility and efficiency. The process takes people from opposite ends of the spectrum and somehow find a way to meet somewhere in the middle. It just works.

The Code Council is dedicated to ensuring that our code development process is the most comprehensive, open, balanced and inclusive of its kind. This is a private-public partnership, and we encourage all interested parties in the private and public sectors to get involved.

Learn more about the code development process and how it works.

Visit Codes Save to learn how the I-Codes support safe, sustainable and resilient communities.