Michael Boso was elected to the International Code Council’s Board of Directors during its 2017 Annual Conference in Columbus, Ohio. Boso began his career in his hometown of Grove City, Ohio, as a building inspector at the age of 25. Years later, he was appointed Chief Building and Zoning Official of Grove City, where he continues to serve today. 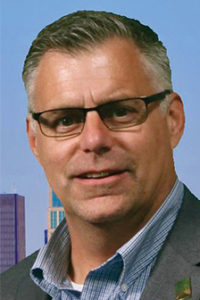 Michael Boso was elected to the International Code Council’s Board of Directors during its 2017 Annual Conference in Columbus, Ohio. Boso began his career in his hometown of Grove City, Ohio, as a building inspector at the age of 25. Years later, he was appointed Chief Building and Zoning Official of Grove City, where he continues to serve today.

“Construction was something I was always into as a kid,” Boso remembers. During his freshman year of high school, he shadowed the local building official, William Lotz, who later became his mentor. This first exposure to the building inspection profession sparked his interest to learn more and dive deeper into the field.

Boso attended a two-year vocational program and then joined the Trade Carpenters Union, where he completed a four-year apprenticeship to become a journeyman carpenter. Boso’s eight-year tenure with the Trade Carpenters Union opened the door for him to follow his aspirations to be a building code inspector. In fact, it all came full circle when he had the opportunity to start his inspector career working under Lotz — the same inspector he shadowed back in high school. He stayed with the Grove City building department and in 1998, he took on Lotz role after his retirement.

Boso’s experience allowed him to see the true value of mentoring and inspiring young people to join the industry.

“I wasn’t always aware of the inspection side of things. But after shadowing the building inspector, I was exposed to that and it got me thinking about it for my future. I thought, ‘One day, I’m going to do that.’ In order to get into it, you’ve got to get out there and get the field experience,” Boso said.

As a true advocate of ICC’s High School Technical Training Program, Boso frequently visits the vocational school he attended and speaks to students. He shares stories of his past with hopes of inspiring them to join the industry.

His advice to young people is to set short- and long-term goals and then continue to review those goals. “As you achieve them, come up with new ones,” he says. “It might not be today or tomorrow, but as long as you have goals that you are working on, you are following a positive direction for your future.”

Boso also advises young people to get involved in the industry, as it will open doors for more opportunities. “Get involved in the chapters and network as much as you can with other code officials, whether that be locally, regionally or even nationally.”

Part of getting involved includes giving back and encouraging others to get involved. “Find people that you think would be good at this position and bring them into the trade. That’s what I do now when I see people that I know have great work ethic and knowledge.”

Inspiring more people to become code professionals, expanding the reach and growing the industry are some of the things Boso looks forward to continuing. His primary goal as a member of the ICC Board of Directors is to “make the organization better than when I started.” Boso plans to be available for members, listen to their various concerns and then take the necessary steps to make it better for all.