The ICC Fire Service Award is presented in honor of Robert W. Gain, a founder of the Uniform Fire Code and a prominent member of the organizations that created the International Fire Code (IFC). The award is given to a member whose professional abilities and leadership serve as an example to all fire prevention and fire protection professionals.

The recipient of the 2019 ICC Fire Service Award is Jeff Shapiro, President of the International Code Consultants. 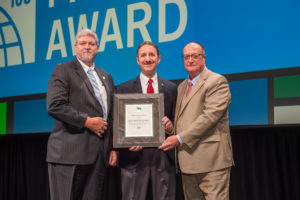